Cardano Shelley: How to stake in Daedalus

Cardano has entered into the Shelley era and we have prepared a guide that helps you to delegate ADA coins to a pool.

Cardano main-net runs as a decentralized network using Proof-of-Stake consensus. You can participate in the decentralization of the network and delegate your ADA coins to a pool. Operators are able to register their pool tickers and you will find them in the Daedalus. You can just select a pool a delegate you ADA coins to it. The pool will have a higher total stake and you will be regularly rewarded every epoch.

I had an older version of Daedalus so I had already created a wallet with a few ADA coins. The procedure is very similar for people who are new and plan to install Daedalus for the first time. In this case, you need to create a wallet and send ADA coins to the wallet.

1. Download the Daedalus wallet from the official page. Go to Cardano.org website and find the item Daedalus Wallet in the top-right menu. Right after the Shelley hard-fork, there was version 2.0.0. Download the latest version for your operating system and install it.

2. Right after the installation, the wallet will download blockchain and will by syncing for a while. Let the wallet do it. It should take not more than an hour if you have a standard network connection and a modern computer.

4. A new wallet name is SHELLEY_WALLET and for security reasons, I provided also the spending password. As always when a new wallet is created, Daedalus showed me a SEED/passphrase that I had to store on a piece of paper. When I confirmed that I will not be able to recover the wallet without 24 words that I have just stored, Daedalus started to sync the transaction history of my old wallet. 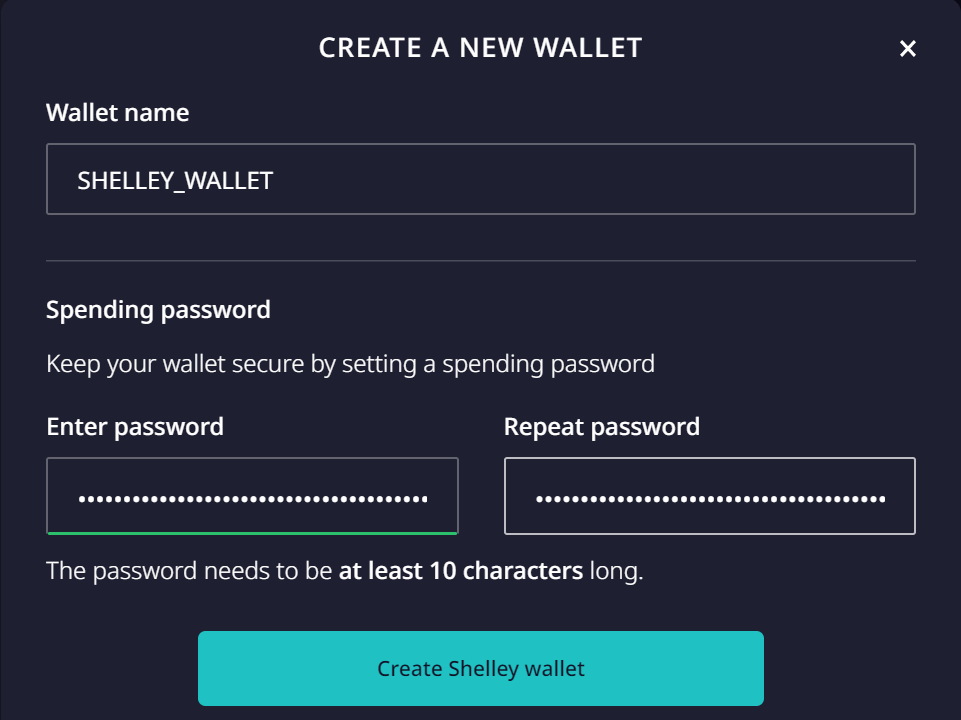 5. SHELLEY_WALLET has been created and I still have my old Byron wallet in Daedalus. You need to transfer funds from the old Byron wallet to the new Shelley wallet via Move ada to an existing wallet button. Click on to the Byron wallet to see the warning below. Notice that you have to pay a fee since it is a regular transaction.

6. I chose my new SHELLEY_WALLET as a fund destination. Daedalus will create a transaction that sends ADA coins from the Byron wallet into the Shelley wallet. You will not need to do this step if you have not had a Byron wallet.

7. If you have ADA coins in Shelley wallet you can delegate them to a pool. To delegate your ADA coins go to the Delegation center and click to Delegate button. 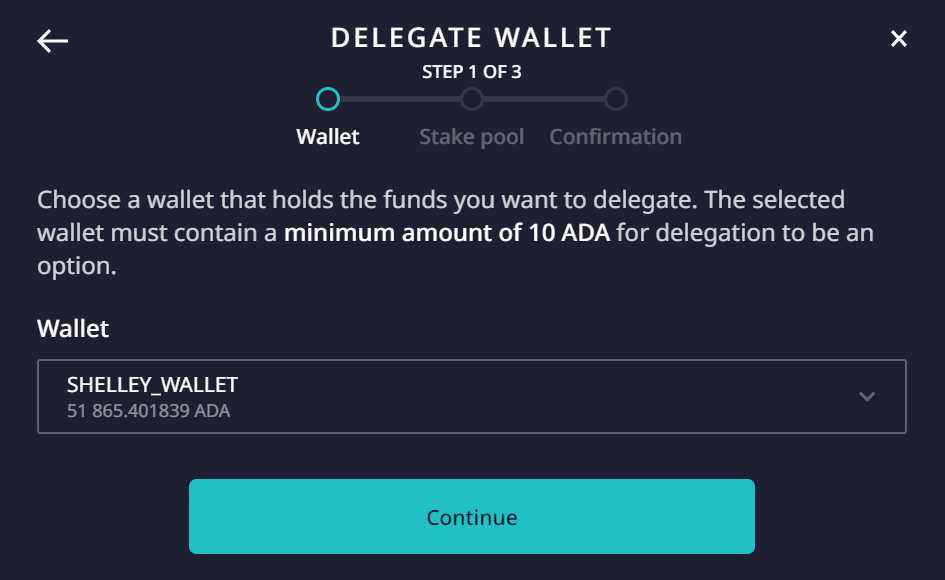 9. You can select a pool in the list or you can write a ticker name into the search field. To delegate to the Cardanians pool, you can write CRDNS or CRDN1. 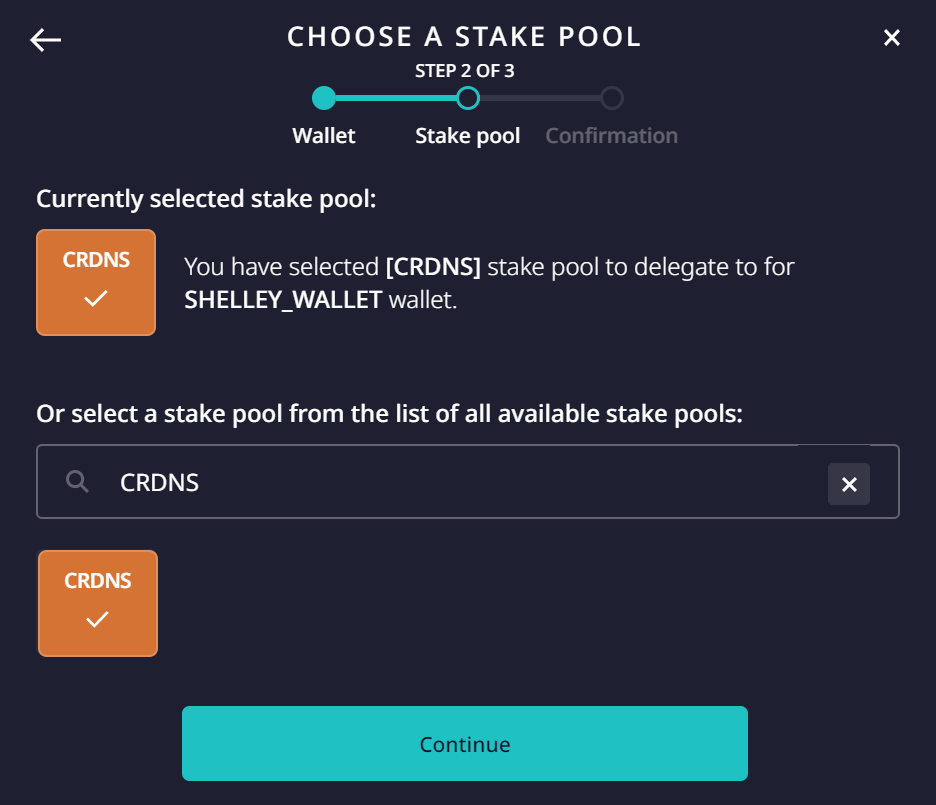 10. Then I confirmed the delegation and it is done. 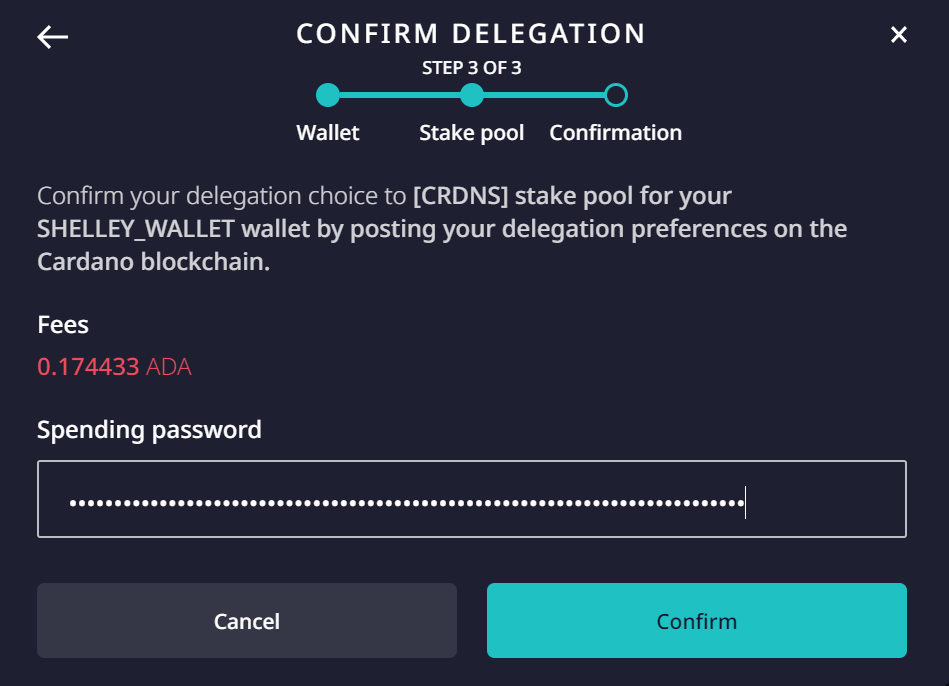 11. Daedalus will let you know when the delegation takes effect.

Notice that delegation preferences and changes will take effect after both the current and next epochs have completed. So in our case, we have to wait a few days. One epoch lasts 5 days and contains 432000 slots. If you delegate in epoch 0 (consider it as the current epoch) then you need to wait till the end of the current epoch. The network takes a stake distribution snapshot at the beginning of every epoch. In our case, it will be at the beginning of the epoch 1. Notice that the snapshot will not take effect in the epoch 1, but in the next epoch, what is the epoch 2. So you will not be rewarded for epochs 0 and 1. The network will use your stake to determine slot leaders in epoch 2. The rewards for epoch 2 will be calculated during epoch 3 and will be also distributed at the end of epoch 3. You will see it in epoch 4. After that period, you will be rewarded in every following epoch. 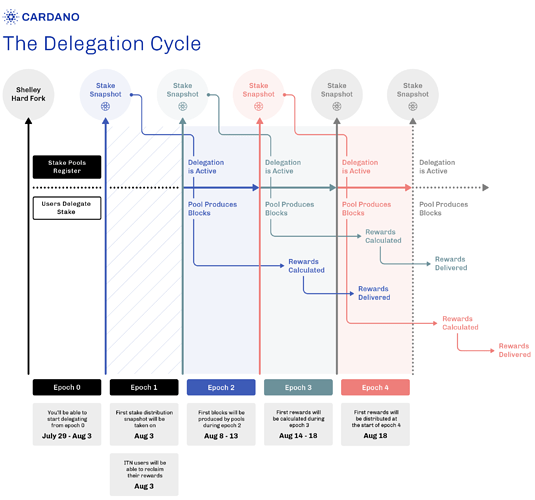 Now obsolete guide related to delegating to a pool in the Shelley test-net. Read more

The delegation is a very intuitive process and we hope our guide will help you. The Shelley era is a big achievement for the Cardano project and pushes the level of decentralization to a new ATH.