People still hesitate to accept blockchain and use it daily life. In today's article, we look at some of the reasons for the slow adoption of this breakthrough technology. Teams can significantly help with the adoption of their projects. However, there are many different groups that can use blockchain quite differently. We will see more projects side by side in the future.

Why people hesitate with the adoption of blockchain

Blockchain technology came into the world as a public network maintained by people for people. Today, there are many projects that are fundamentally different and they attract users accordingly. But who are these users, and how do they choose the blockchain that suits their needs the best? Users can be ordinary people, entrepreneurs, industries, banks, or even states. Obviously, different groups of people will require different blockchain characteristics and functionalities. Some projects focus on one purpose only. Other projects are more versatile and can serve multiple purposes. Yet people have not massively adopted the blockchain.

Let's ask why people have not yet adopted the blockchain. We would find more reasons:

The focus of projects directly influences the way of adoption. Private coins that do not offer additional functionality will be found by users themselves. As we have seen in the second case, in terms of business and the possible use of projects at the national level, the boundaries of privacy need to be clearly defined. Because requirements may vary in different use cases, the project should allow for flexible privacy settings. Here, teams have basically two ways to deal with the problem. Make the project very versatile, or talk to representatives of business, banks, and governments to clarify system requirements regarding privacy. This is only true if the team decides to work with regulators. This may not always be the case.

Most projects are not ready for mass adoption. We have just given a few most discussed reasons, and certainly, there would be more. There are also projects that work with a private version of blockchain. This approach addresses the shortcomings of the public blockchain projects. Private blockchains have no problem with scalability and privacy. All authentication nodes are operated by partners and data protection is higher than in a common database. Trust works only between partners, not from outside. In this article, we will not deal with private blockchain projects.

The Cardano project team deals with all the details of network deployment. The team wants to launch the main-net in production quality. The project will be ready for use. The team does not want to launch the main-net and then say that it is only an experiment and continue to work on key functionalities. It is clear to the team that in order to succeed in the competition of other projects, it must deliver a first-class product including solved scalability, privacy, secure language for writing smart contracts, and other things. The project will offer functionalities and capabilities that can compete and even outperform existing solutions. Cardano is a project that is open to everyone. It can be used by ordinary people, businesses, industries, banks, and states. Regarding regulations, the team will do its utmost to ensure the privacy of users while meeting the stringent demands of regulators. Cardano has no ambition to smash existing structures, but to bring more reliability, fairness, and transparency. Changes may not always appeal to everyone, as some businesses will be disrupted.

What teams can do for adoption

Understandable requirements can only be defined by mutual understanding between the team and future users of the system. There is a good chance that if the team meets the requirements and delivers the system that users want, the system will actually be used. This is very important for adoption. If you think more about it, this is probably one of the best ways to achieve mass adoption. Let's explore what teams can do to increase the adoption of their projects.

This is not a complete listing of all options. Individual options could be combined in various ways. It can happen that the approach of a team change in time just because of striving for higher adoption.

There are projects where the team is not interested in being publicly known. These are mainly first-generation projects. There is an effort to convince people that the project is also decentralized at the level of development and management. Everyone can theoretically change an open-source project. What is crucial, however, is how it is decided to incorporate the proposed change. These processes cannot always be completely transparent and suitable for business. On the other hand, we have projects that are open to any debate about the project. Teams work with future partners and regular users. It is generally known who the representatives of these teams are and how they can be contacted.

Each approach suits a different project. With the complexity of the project and the broader focus on problem-solving, the demand for communication is increasing. In some cases, specific details need to be addressed. This can then affect the usability rate in different use cases.

A cryptocurrency implemented by a mere transaction system does not need to address the complex details that a business needs. In addition, the team longs to remain anonymous and get lost in the crowd of developers. This is especially true for anonymous cryptocurrencies. On the contrary, this cannot apply to platforms. The platforms will be used by developers. Developers can build some business logic for companies, banks, or states. The team must, therefore, listen carefully to all requests and address them.

The public network must be trusted. But the question is for whom. A certain group of people will trust the project with an anonymous team. This is totally inadequate for certain entities that need to have contact with the team in case of problem-solving and new requests.

At the moment, it is not clear which approach is better for adoption. Network and team decentralization are two completely different things. The network consensus and its decentralization is completely independent of the team. The team is not necessarily decentralized through the effort to remain anonymous. Behind each project is always a group of specific developers who will have a strong say. In addition, with the increasing adoption of projects, even wannabe anonymous teams will become more publicly known. If the team is to be decentralized at the team level, it is necessary to work on governance. The team will always be centralized to some extent. So it is not important WHO will make changes to the code, but WHAT will it be. Interested people should be able to influence WHAT will be done. However, it is also possible to decide WHO.

Cardano is a social and financial operating system. It is a platform that offers versatility and programmability. It can serve a wide range of people and groups. People's needs vary greatly depending on the area in which they live. People in Western developed countries have a good infrastructure and financial system at their disposal. This is not to be said about people in developing countries, which often lack land registers or a quick way to pay for electricity. To this day, people in some countries have to stand in line just to pay their bills physically at the office. Today, cryptocurrencies to Western people serve mainly as speculative investments or some manifestation of revolt against the current system. Slowly, some solutions are pushing through in the real business. In developing countries, blockchain has much greater potential for improving the quality of life. A completely new infrastructure can be built on the blockchain. But this is not going to be a revolution. The teams must communicate directly with government representatives and ask them about specific problems. He must then try to solve these problems. If they succeed, millions of people can quickly adopt a blockchain. This often requires a connection to the physical world. Working with people's real identities must not be an obstacle.

The Cardano Foundation is part of this initiative and will be involved in developing this corner of the world. The team is convinced that Cardano can make a significant contribution and help with the adoption of the blockchain. 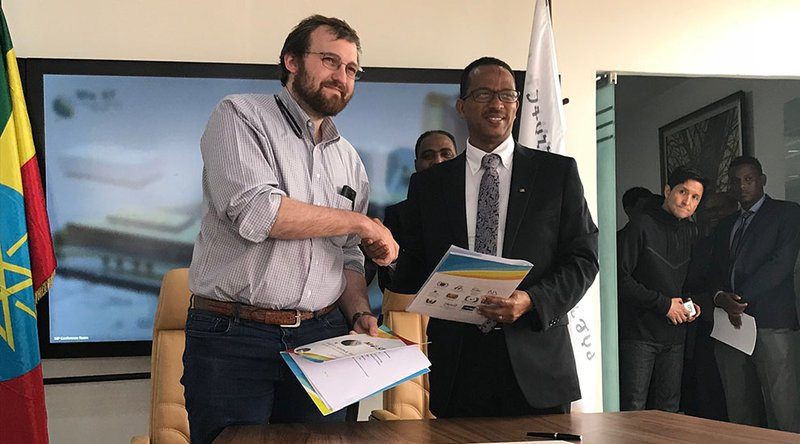 The Cardano Foundation is also working with other developing countries. Interestingly, the Memorandum of Understanding (MOU) was signed with the following countries: Mongolia, Georgia, South Korea, and Ethiopia.

Today's article was an overview of the current state of adoption of blockchain. We wanted to show you how diverse adoption can be and that individual projects never have a chance to meet the needs of all groups of people. Cardano still has a great chance to succeed and the Cardano Foundation team is working hard on adoption. Charles Hoskinson also helps them in this activity. Cardano chose a path of cooperation, transparency, and fair chances for everybody in the ecosystem.